Welcome to the 4th Annual BDTB Wrap Up!

December 3-16: Nomination Stage – The top eight nominees, plus BDTB’s (however many we feel) picks, advance.
December 17-31: Voting Stage – We start the official voting for the Wrap Up. Nomination votes don’t carry over.
January 1: Winners Announced

To nominate please select “add answer” below and add your favorite for each category. If your favorite is already added, simply select your favorite and click vote. The goal behind nominations is for you to tell us your favorites. So yeah, do that. 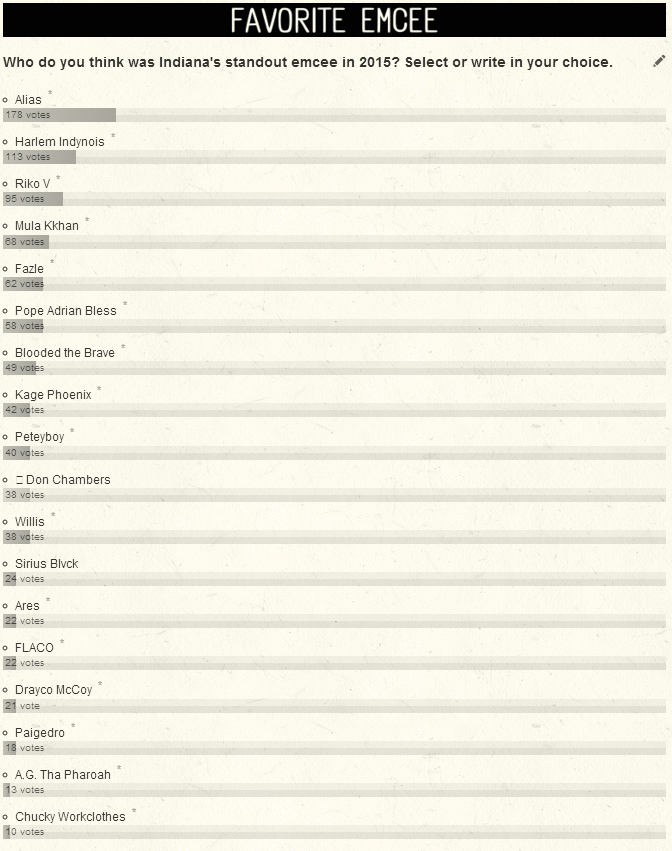 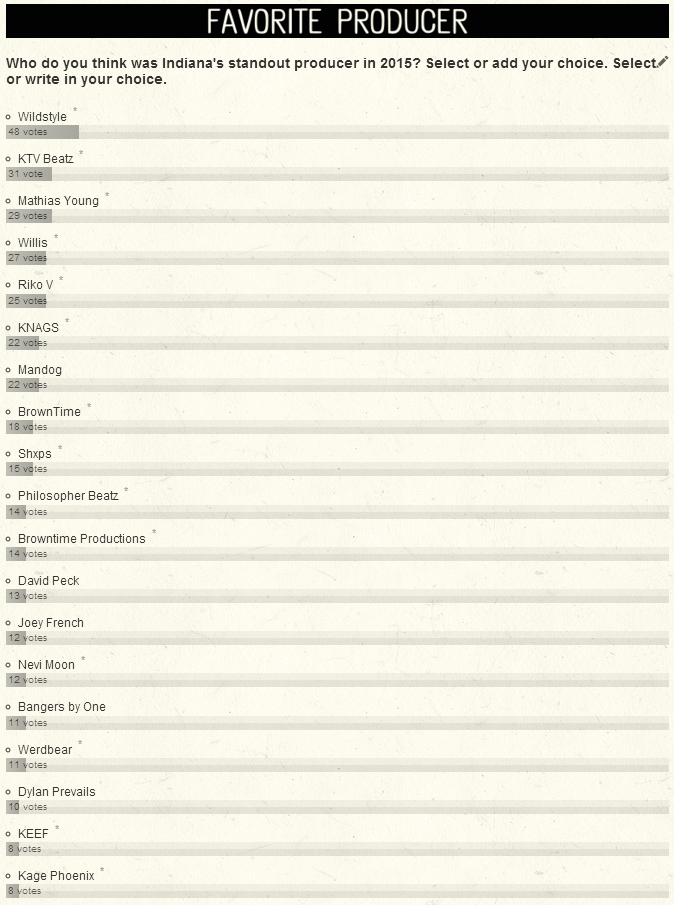 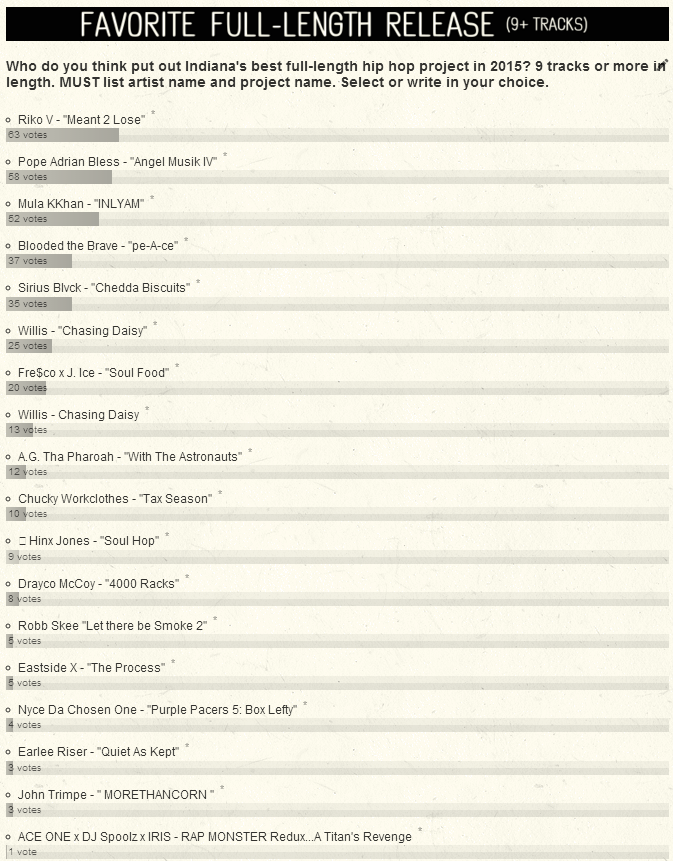 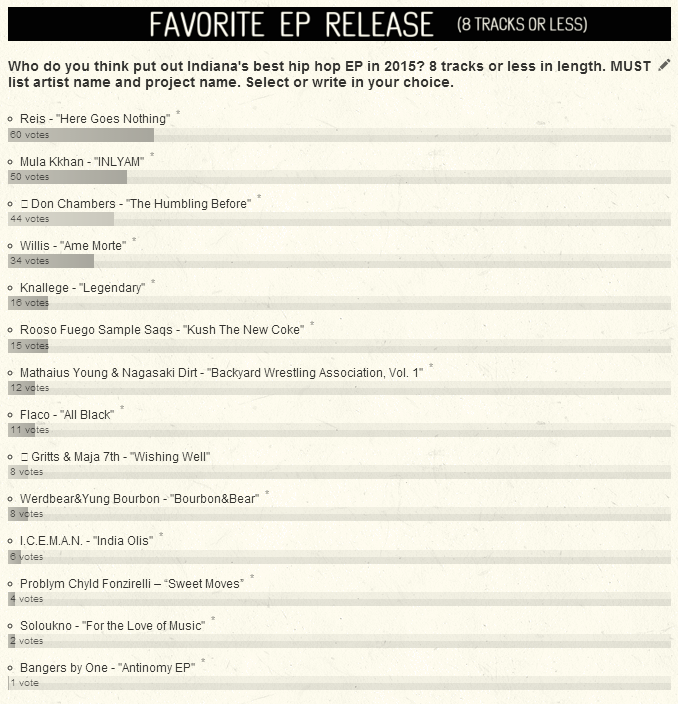 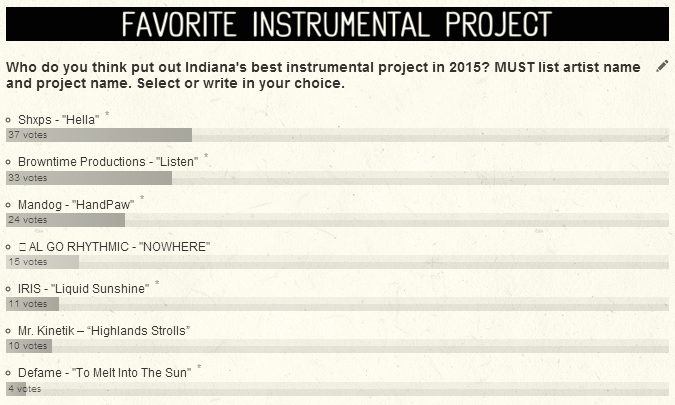 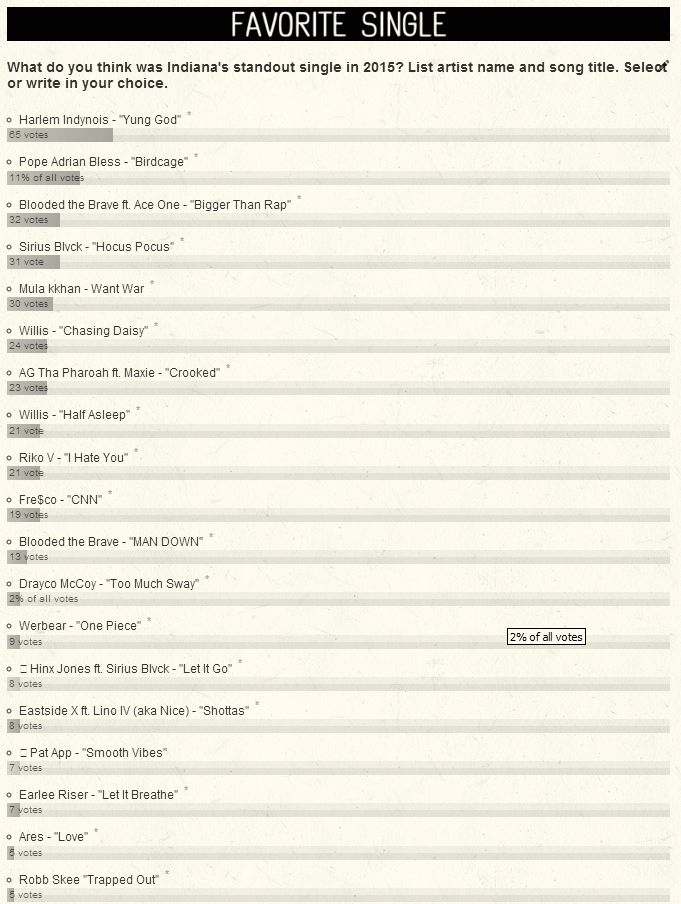 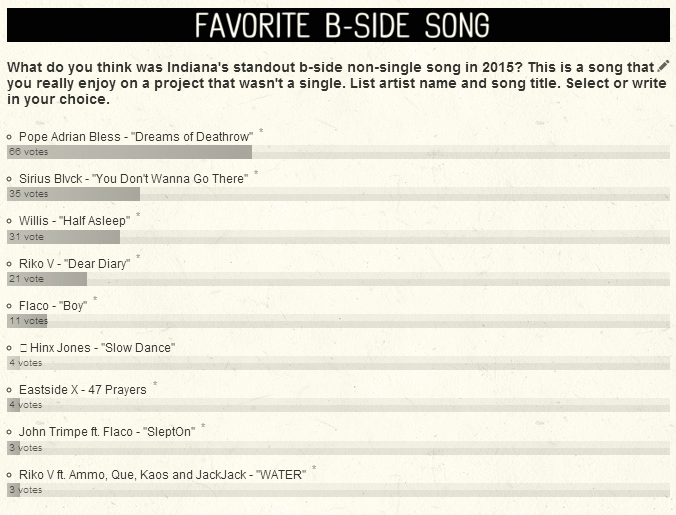 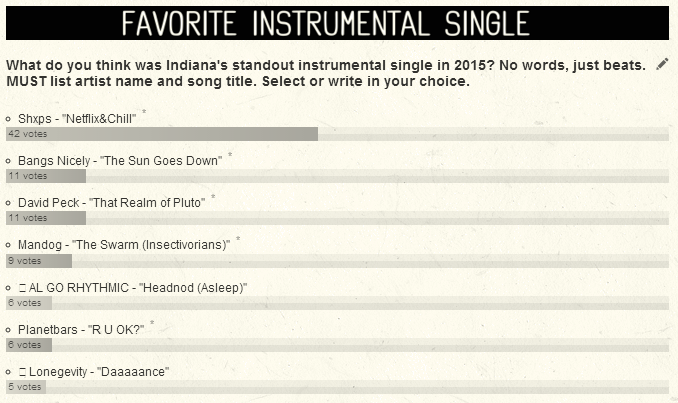 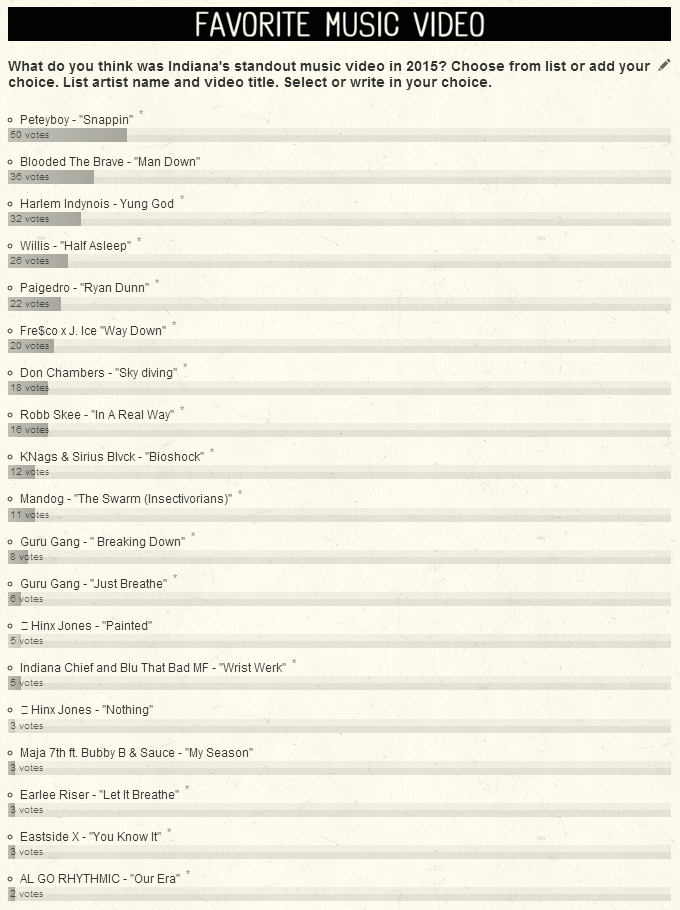 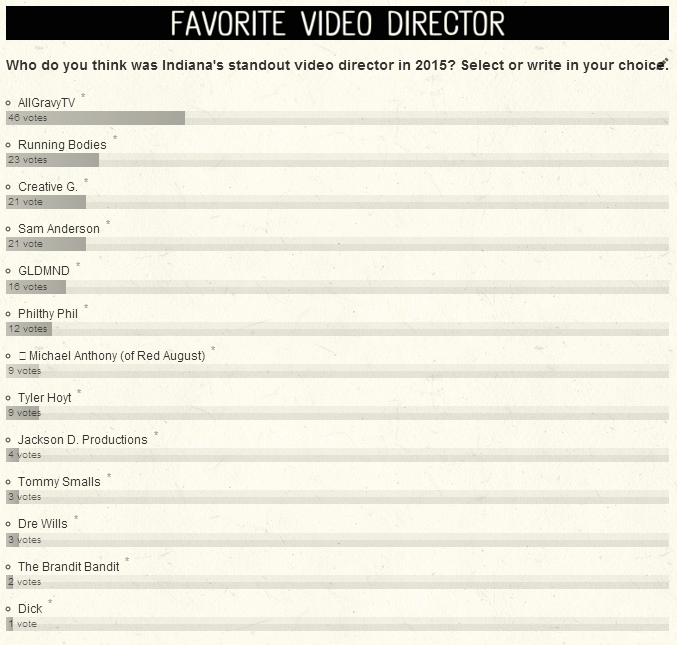 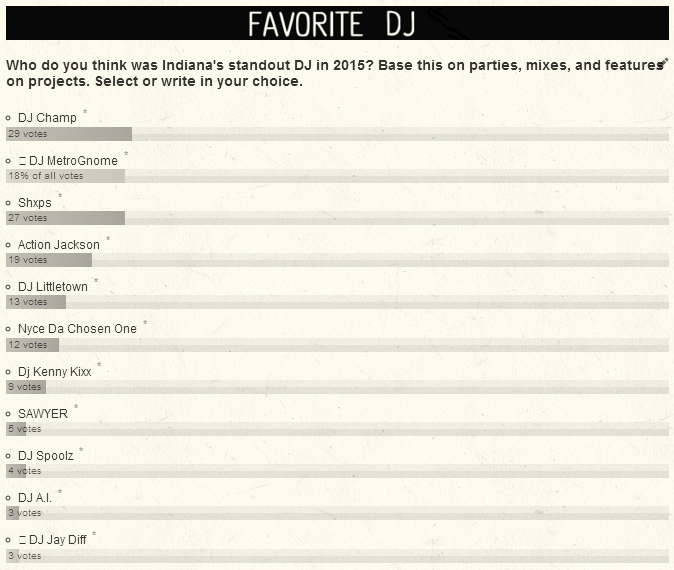 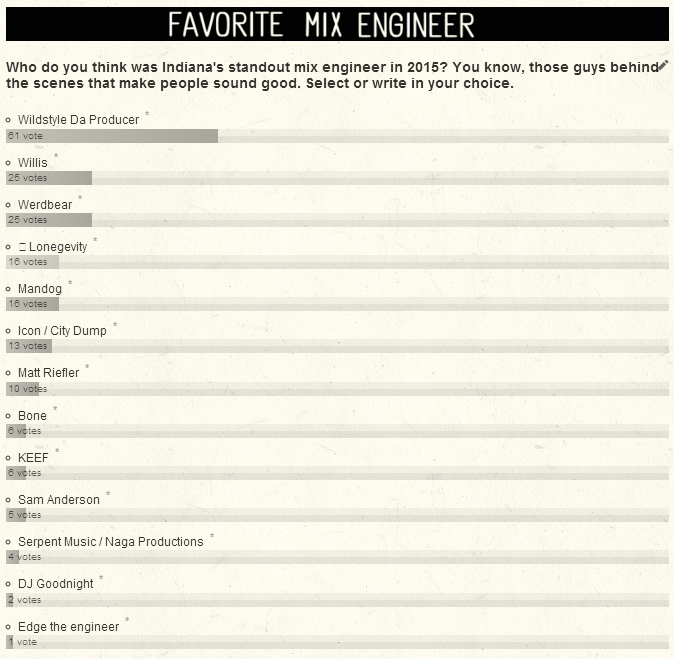 More Detail / Backstory on Nominations: This year you have the option to nominate your favorites! In the past, it’s been really hard to keep up with all of the different artists putting out music and songs, and in so we limited it to songs/artists/projects that we actually posted. That means that we unfortunately missed some people. Since we’ve also expanded and added the HHI (hiphopindiana.com) portion of BDTB, we now share a lot more Indiana artists than we have in the past, which adds a unique problem: our lists could be exceptionally large.

So, with that being said, we’ve decided to leave it up to you all this year to nominate who you think should be represented in each category for your favorite Indiana artists, songs, and so forth. We will also chime in and add our own personal nominations, but most of the nominations will be from what you guys select below.

After the nomination stage is final on December 16th, we’ll tally the total nomination votes and select the top 10 nominees for each category to slug it out in the final round of voting. So yeah, even if you see someone or a song you already like, it’s important for you to still vote for them so that they can be properly represented. Maybe we’ll have a prize and interview for the winners this year?