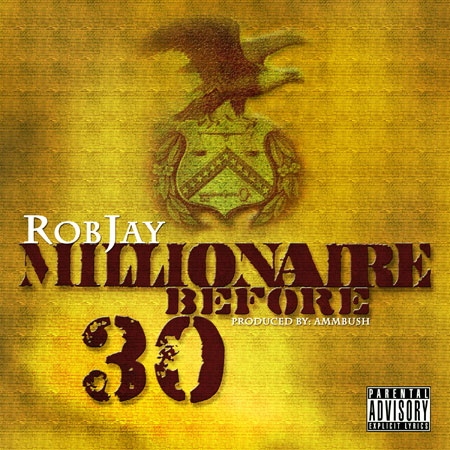 Here’s a dope cut. Below’s a little info on the cat.

Rob Jay is proud to announce the release of his new EP, Millionaire Before 30. The Houston rhymesmith’s latest project, with production handled entirely by Ammbush of the Drums & Ammo crew, will be released October 24th.

In his relatively short three-year career, Rob Jay has already garnered accolades ranging from being named as one of The 10 Breakout Artists of 2010 by Kevin Nottingham to one of The Top 100 Unsigned Artists by Music Connection Magazine. As the follow-up to his debut album, Art Life, Millionaire Before 30 acts as the EP’s title as well as Rob’s personal goal, specifically transitioning from having an independent cult following to full-blown commercial success.

The first taste from Millionaire Before 30 is a conceptual track entitled “My Past Life,” a hypothetical period piece that paints a picture of Rob Jay as a kid from Harlem circa 1968. “I’m a fan of the late ’60s, ’70s era, so I thought of who I would have been if I was a part of that era,” says Rob. “I want people today to understand what people our age had to go through during that time. We’re so free today, but back then you got sent into a war, and lost friends to that war.”

With a jazzy, retro production by Ammbush, “My Past Life” throws away the idea of a hook to focus on telling the song’s story. Bars like “Somehow I thought them drugs was the answer/ Then I linked up with the Panthers/ Huey P would drops jewels whenever he’d see me/ I met Malcom X and was cool with Afeni” describe how Rob Jay envisions his past life, beginning from getting drafted for the Vietnam War, to falling into drugs like many war vets, to overcoming his demons and becoming a fixture in the Harlem community.